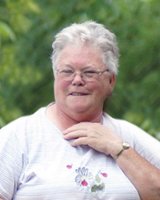 Sharon Elizabeth Rubick (nee Lippert) of RR#1 Formosa, passed away unexpectedly at Palmerston & District Hospital on Friday December 4, 2020 in her 77th year. Beloved wife of Adolf Rubick for 57 years. Loving and devoted Mom to her five children; Sandra Kriter, Stefan (Marilyn) Rubick, Sheila (Glen) Burgess, Susanne (Sean) Cassidy, and Michael Rubick. Cherished Grandmother of 15… Andrew, Carolyn and Valerie Kriter; Blair (Alana) Rubick, Justin (Keira) Rubick, Nicole Rubick; Jessica (Bryon) Burgess, Jackie (Evan) Blanchard, Alisha (Dan) Martens, Sarah (Shayne) Burgess, Greg (Taylor) Burgess, Erik (Hayley) Burgess; Shannon, Cayden and Hudson Cassidy, and 12 Great-Grandchildren. Lovingly remembered by brother Ronald Lippert (Jeanette), brother-in-law David Goll, sisters-in-law Friedericki Wagner and Gertrud Farber as well as several nieces, nephews and step-grandchildren. Predeceased by her parents Melvin Lippert, and Wilma Taylor (nee Lambertus), her sisters Christine Goll and Frances (infancy), brothers-in-law Max Wagner and Xaver Farber, grandson John Rubick, & great-grandson Braxton Blanchard. Sharon enjoyed cooking and baking and shared her bounty with those who graced her table. She always said “if you left hungry it was your own fault.” She enjoyed making crafts and delighting others with her generous spirit. She put others before herself and loved to give. You never left her home empty handed. She was always ready to listen and lend a hand. She was an example to us all in her unwavering faith in God and the power of prayer. She often prayed for others and offered up novenas for the benefit of her family and others, and strongly believed in the powers of St. Anthony and St. Christopher. Sharon was a member of the Formosa CWL for 50 years, the Walkerton Chapter of Child Find, Sparks leader and a volunteer of the Rose Shop in Walkerton. Following Sharon’s wishes, cremation has taken place and a private family service to honour her life will be held at the Sacred Heart Cemetery, Mildmay, on December 9th, 2020; her final resting place. By Sharon’s request Memorial donations to Crohn’s and Colitis Canada would be appreciated as expressions of sympathy and can be arranged online or by contacting the funeral home.