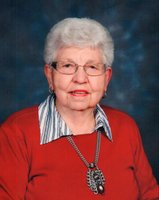 Marie Sarah Adeline Christie (née Seegmiller), a resident of Braemar Retirement Centre and formerly of R-Villa and Teeswater, passed away on Monday, December 28th, 2020, at the age of 97. Loving mother of Thomas and Betty of Teeswater. Cherished grandmother of Deanna and John Koehmstedt, Kevin and Sherri Christie all of Teeswater, and Jonathan Christie and Alberto Federman of Toronto. Great-grandmother of Mickayla, Tommy, Kaiden and Landan Christie. Fondly remembered by her sister-in-law Dorothy (Christie) Shouldice of Owen Sound and several nieces and nephews. Beloved wife of the late Russell Christie, who predeceased her in 2006. She was the last surviving member of a large family; five brothers and two sisters. As a child, Marie grew up in the Walkerton area. She moved to Teeswater-Culross after the Second World War, when Russell returned from overseas. They dairy farmed for many years at the edge of Teeswater. Marie was an excellent home maker. Over the years she was an active member of the United Church Women, Teeswater Curling Club and Teeswater-Culross Agricultural Society. She enjoyed a game of bridge and a coffee at the local coffee shop. Private family arrangements with spring interment at Walkerton Cemetery. Memorial donations to the Wingham and District Hospital Foundation or the Canadian Cancer Society would be greatly appreciated as expressions of sympathy and may be arranged on-line or through the funeral home.